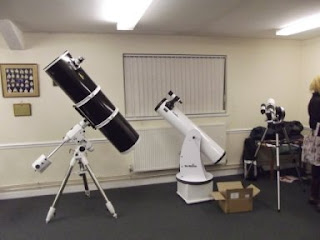 Hot on the heels of the BBC2 "Stargazing Live" programmes we held our own event on Friday 11th January.
We advertised the event on the “Things to Do” section of BBC2 Stargazing Live website as well as putting posters in Tesco, Morrisons, County Library etc. 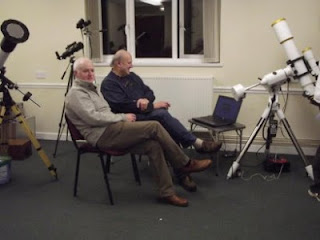 Here are Andrew and Dave sitting among a few of the ‘scopes on display. I believe this is Andrew’s  Williams Optic's 120mm refractor the instrument behind many of his deep sky images.

Plenty of other scopes were on display including the PAG’s behemoth – the black beast in the picture above – a Skywatcher Explorer 300 PDS  with a EQ6 Pro telescope mount.

Phil, our Vice Chairman, has responsibility for this currently – I’m sure he’ll be “over the moon” when we have our own storage facility at Letterston so that he no longer has to ferry it back and forth!!

Displays of books, magazines and pictures were of interest to many as was Andrew's record of photographic images on the laptop (right). We also had a looped powerpoint presentation of our monthly "What's Up" feature - a look at the hilights of the current months night sky.

Key players on the night included Brian and Liz (left) who kindly gave of their time to provide refreshments for us all.

Apologies for small pictures (& quality - it will improve!!).

Some of our visitors/members milling around and to the upper left we have Graham admiring our display boards.

Though the numbers were not as high as 2012 (I guesstimate around 30 attended) we had at least 8 attending for the first time.
Mike our man from Goodwick, said that 2 turned up on Tuesday (our normal meeting night) but did not return for Friday.!!
Several of our regulars whom we expected to be present - would have made our numbers closer to 40 but some absentees have always to be expected!!
Some of the first timers - Kathy and her husband (what is his name?) were particularly enthusiastic and Ian who mixed well with the group is the latest addition to the forum I note. (Looks like he went home and signed up straight away!)


Sadly no viewing was possible – the cloud cover was total for most of the evening – but when we left at 9.30 ish Jupiter was riding high as was Orion, Gemini and much more – now what do we call that?


Look forward to seeing as many of you as is possible in February when we are back to our normal routine.


'Stellar Evolution and the Hertzsprung-Russell Diagram - part 1' is the main lecture to be covered by Kim Gowney but before that we have the “What’s Up in February” feature.


Refreshments will be available and if conditions are suitable we'll have an observation session too.