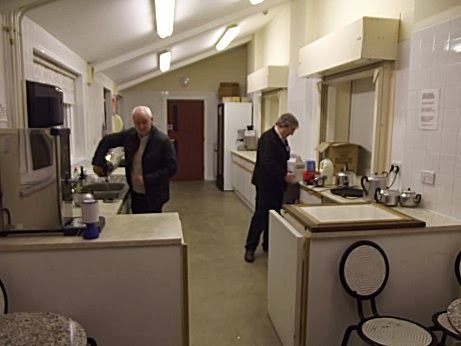 I had to include this picture as it makes me look - well - slim!

Andrew, on the left, and yours truly setting up the tea and biscuits before the meeting.

Perhaps because it was fireworks night our numbers were reduced this time – just 22 of the faithful attended.

Apologies were received from Rob976, Nathan, Yoroy, Rob the Secretary and Philt. Richard was back and forth juggling his firework duties at the other end of the village and other regulars – Mike, Liz, Brian, Gladys etc were sadly missed.

We look forward to seeing you all in December for the “Quiz” and mince pies!

The “What’s Up in November” feature highlighted the fact that 4 comets would be in the early morning sky around the 9th – couple that with a conjunction of Mercury and Saturn on the 26th and a busy month was promised. 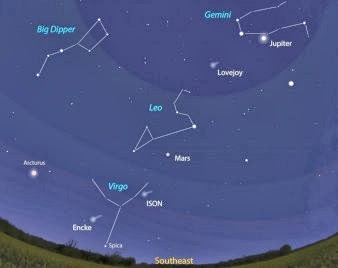 For those who prefer night-time astronomy November is a good time to look for M31 the Andromeda galaxy – the most distant object easily visible with the naked eye at 2.5 million light years (ish).
M33 – the Triangulum Galaxy is another contender for this title being a little further afield ( astronomically speaking) but  is a difficult galaxy to spot as its surface brightness is low and is spread over a large area of sky.
Mike also made mention of another evening constellation - Taurus (the bull) which houses the open clusters Pleiades and Hyades along with M1 the supernova remnant.


A star’s lifespan & eventual fate are determined by the original mass of the star – bigger stars are doomed to an early death as they rip through nuclear reactions at a reckless rate.
Solar mass stars that Kim dealt with are more modest - they convert hydrogen to helium in the core and live considerably longer in astronomical terms! 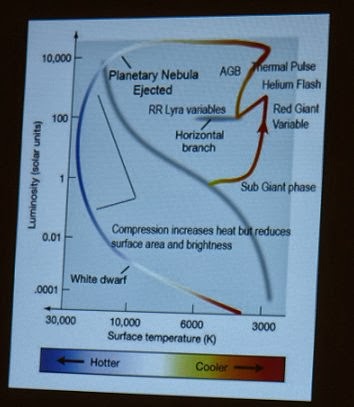 The summary picture reveals that, although 90% of the star’s life is spent on the main sequence, fusion reactions and gravitational contractions change the star to a red giant/supergiant.

Most stars probably change from red giants to pulsating variable stars (Cepheids or RR Lyrae) before they finally die.

Final life stages of a star like our Sun include planetary nebula, white dwarf followed by dead black dwarf.


This is a fascinating subject which gave rise to a number of questions which Kim eloquently answered in conclusion.
It was one of those subjects that we need to hear several times before we can grasp it fully.
It would be good, once the website is back online, to have the words and pictures for this lecture made available for further viewing.
Our thanks to Kim for the hard work and research he put into making this such a meaningful and enlightening subject.

Question time continued after the meeting.

Here we have Kim doing an "Eric Morecombe" impression!!


For December it is “Quiz Night” – I’ll make it easier than last year!!


Hopefully we’ll have some clear skies also - and so add viewing to our agenda.