Some wicked weather on Tuesday the 2nd kept many away but 16 faithful souls turned up to enjoy the programme.
Mike started the meeting with the review of "What's Up" in the current night sky.
First was a flashback to June when the "megamoon" of the 23rd was a highlight. 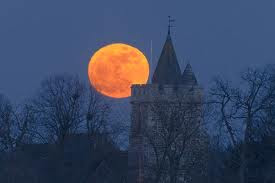 With the Moon at perihelion and at low elevation the moon illusion comes into play - we perceive it to be larger than it really is.


Though we didn't capture images as graphic as this (left) one from Wiltshire one of our members - Mark - did produce an image that was well received.(see below). 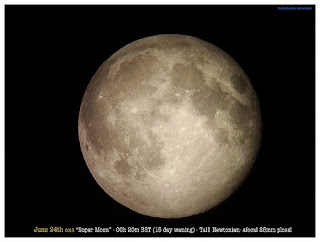 We also considered the stars of the Summer Triangle - Altair, Deneb & Vega which though of similar brightness are very different. Deneb, for example, is said to be 60,000 times brighter than our Sun & one of the  most brilliant stars known.
An interesting side thought was that Vega has the claim to fame of being the first star, other than the Sun, to be photographed (1850) and also the first to be analyzed by spectrograph.

For July a number of lunar features were suggested for viewing to coincide with 1st & 3rd quarters. For the planets - the latter part of July would appear the best time . Saturn & Venus are both available  after sunset early in the month but during the last week of July there is a nice grouping of Jupiter, Mars & Mercury - though the bad news is you will have to be around just after 4.00 BST to see it.

Another interesting line-up on 24th is the moons of Saturn - 6 of them make a nice show shortly after sunset. 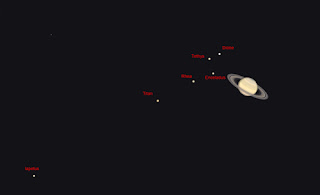 This is it with Iapetus to the far left and Dione topmost - a fine imaging opportunity.

We also considered a number of specials - Sun dogs was one - sometimes truly spectacular and at other times not so striking but something different.
The left image (below) was taken in the USA, the right in St Ishmaels.
It must be said that this is an atmospheric event and not strictly astronomical. 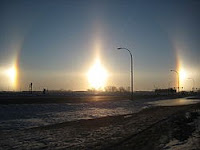 We have to wonder just how many of these sorts of phenomenon we see but don't recognize?

We also made mention of other curiosities to be on the lookout for - our old favourite  Noctilucent Clouds being one - July is the best month for these. The Belt of Venus was the final atmospheric effect mentioned - these three are just some of the things we can look for in the night sky at a time when the skies are never truly dark!

The main lecture on Variable stars was covered enthusiastically by Jim - a subject he has made a personal study of over many years.
We looked first at the different categories of variables and followed that with a look at how to measure variable stars by either comparing them with a known star or more frequently these days by CCD cameras & computer analysis.
Light curves was another interesting insight and it was a startling revelation that back in 1786 only 10 variable stars were known compared with a 2009 figure of 47,811 with more being discovered all the time.
I, for one, was greatly inspired by this lecture and later looked at on-line resources including the AAVSO (google it!) - a wealth of material there and a book Jim recommended was David Levy's "Guide to Variable Stars."  £5 Jim said (that was likely 30 years ago!) - its available through "Amazon" for considerably more than that, though I have managed to locate a cheapie through good old ebay. 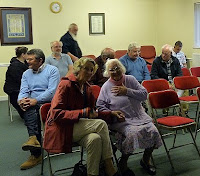 No meeting at the Letterston Memorial Hall in August though we do have an event at Newgale on the 10th August to coincide with the Perseids meteor shower - keep an eye on the forum for updates.

A final look at some of the faithful few who turned out on a grubby night.

With the nights now "drawing in" we are looking to add more viewing time to our meetings.

Starting with the October meeting (it will be dark when we meet then) - if the weather is clear  - we will just cover the "What's Up" material for the night and then get outside for what we all enjoy best - a good telescopic view of the sky. Of course if the sky is not clear we will revert to the planned lecture for the night.
Feel free to bring your own 'scopes on the night in anticipation - and of course we'll have plenty of tea/coffee/biscuits to top up with.:)
Posted by mike at 10:09 No comments: