The P.A.G. annual "solar day" was held at the lifesaving club premises at Newgale on Saturday 8th August from midday.
Our thanks to Roy for allowing us access to this venue yet again.

Below are a selection of pictures received - once again it appears to have been a successful event! 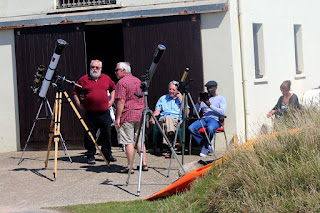 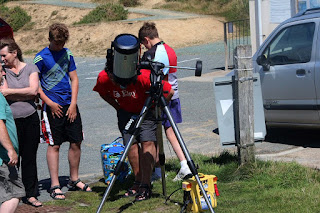 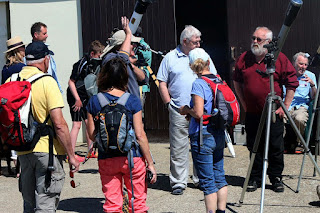 Thanks to Phil T for these pictures!
Posted by mike at 08:05 No comments:

24 of us attended the September meeting and at least another 8  would normally be there (by my reckoning!!) We average around 30 at the meetings so this was a good turn out for the 1st meeting since the August break.

Our container (rescued by Richard from an un-named venue in Haverfordwest) caused some interest early on. When the interior painting is complete it will be fully useable though we have already placed a few lumpy articles inside to save carting back and forth.
Phil has fixed up some interior lighting and arranged for a sturdy padlock - all useful additions.


We started a little late with Kim's look at "What's Up" in September.
Planets are in short supply this month - Saturn is  low down in the evening sky and for the early risers Venus is there.
Copernicus was the Moon crater considered and some deep sky areas were hilighted for globular clusters and the like. An unusually short one for Kim but he will make up for it!!
We really must mention the total lunar eclipse later this month. Sadly it's early morning but check out our Twitter site for more details or "google" it.
twitter.com/preseliastro
www.jb.man.ac.uk/astronomy/nightsky/

The main lecture covered by Mike was on the subject of "Solar Superstorms".
A scary insight into how dangerous our nearest star can be. The met office now has a dedicated site for this that is well worth keeping an eye on.
www.spaceweather.com 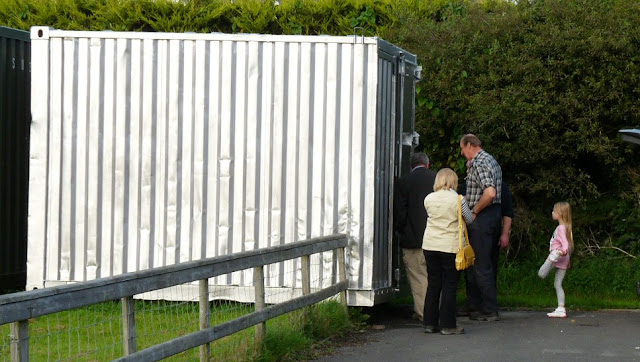 Around 8.45, miraculously, the sky had cleared somewhat and we set up binoculars and telecopes for a brief time.
Saturn was the easy target and low down so better for binocular viewing. The 25x 100's showed the ring system clearly to the delight of many.
We also managed to see M31, the Andromeda galaxy and the double cluster in Perseus.
Plenty of constellations were visible, Ursa Major, Hercules, Sagittarius, Ophiuchus (another of Kim's subjects, so good to have sight of), Bootes etc. etc.
Those that stayed had this extra treat - let's hope we have more clear skies on our meeting nights - it adds that extra ingredient that makes the evening worthwhile.

Next month the subject under consideration will be "Variable Stars" - join us if you can at our usual venue the Letterston Memorial Hall on Tuesday October 6th at 7.00 p.m.
Posted by mike at 05:07 No comments: