The June meeting was held at our usual venue - the Letterston Memorial Hall & at the usual 1st Tuesday of the month at 7.00.p.m.

22 attended - several of our regulars couldn't make it this time including Andrew, Liz, Brian, Rob and Nathan to name a few.
We did have 2 new attendees - Mike and his wife (regret I missed her name) from Neyland.

Rob has intimated that he is to put the material from the main lecture on the website so check for it here:
click here

Hence as from this post I will be omitting the main lecture thoughts.

Other lecture material will be posted on the website from time to time.


The "What's Up in June" item is reproduced in slide form below and notes related to the slides are there also.


WHAT’s UP IN JUNE

2
June2-4.  Mercury visible about 45 mins after sunset given a low horizon.
Fading from +1.2 to +3.4 (on the 11th). Lost to view as it moves towards inferior conjunction
(lying between the Earth & Sun) on 19th.
3
Looking  East before dawn (30 mins). Venus, shining at mag.~ -3.9 and lying between the Pleiades & Hyades clusters in Taurus, will be seen ~2.5 degrees to the left of a thin crescent Moon.
4
If you have yet to spot Saturn through a telescope, it’s still well placed in the sky especially around midnight. If you can draw your attention away from the beautiful rings, see if you can spot Saturn’s largest and brightest moon, Titan at its greatest elongation - that is its greatest distance from the planet- on the 7th of the month.
Magnitude 8.2 – visible in binoculars held steady.
5
A small telescope will show the rings with a magnification of x25 and one of 6-8 inches aperture with a magnification of ~x200 with good “seeing” (calm atmosphere) will show Saturn and its ring system in its full glory.
As Saturn rotates quickly with a day of just 10.5 hours, its equator bulges slightly so it appears a little squashed.
Like Jupiter, it does show belts but their colours are muted in comparison.
6
These are 2 good nights to observe an interesting feature on the Moon if you have a small telescope.
Close to the limb (on 6th) is the Appenine mountain chain that marks the edge of Mare Imbrium.
Toward the upper end you should see the cleft across them called the Alpine alley. It is about 7 miles wide and 79 miles long. As shown in the image a thin rill runs along its length which is challenging to observe. Over the next 2 nights the dark crater Plato & the young crater Copernicus will come into view.
7
2 G.C’s in Hercules – M13 & M92 are impressive
8
Lyra  is dominated by its brightest star, Vega, the 5th brightest star in the sky. It is a blue-white star having a magnitude of 0.03 and lies 26 light years away.
There is a lovely double star called Epsilon Lyrae up and to the left of Lyra. Binoculars will show them up easily.
A telescope shows that each of the two stars is a double star as well so it is called a double double!
Cygnus, the Swan, is sometimes called the Northern Cross. Deneb, the Arabic word for “tail” is a 1.3 magnitude star that marks the tail of the swan. It is nearly 2000 light years away and appears so bright only because it gives out around 80,000 times as much light as our Sun. If Deneb were as close as Sirius it would appear as brilliant as the half moon and the sky would never be really dark when it was above the horizon.
Albireo which marks the head of the swan is much fainter and a beautiful sight in a small telescope – slide 10.
M56 is an 8th magnitude globular cluster visible in binoculars. Slide 10 also.
9
M57 is a planetary nebula – so called because in a telescope they show a disc –like planets. They are, in fact, remnants of stars that have come to the end of their life and have blown off a shell of dust and gas around them.
Brocchi’s Cluster is an easy object to spot with binoculars – often called “the Coathanger” although it appears upside down in the sky. Follow down the neck of the swan to Albireo then sweep down and to its lower left
10
Albireo is made of two stars – one is amber and the other green which provide a wonderful colour contrast. With magnitudes 31 and 5.1 they are regarded as the most beautiful double that can be seen in the sky.
There is a beautiful region of nebulosity up and to the left of Deneb which is visible in binoculars in a dark and clear sky. Photographs show an outline that looks like N America – hence the name....

Just one picture to conclude with -this is Peter giving out the latest FAS newsletter.

I hope you like this format - I can't guarantee it will always look like this but variety is ......... 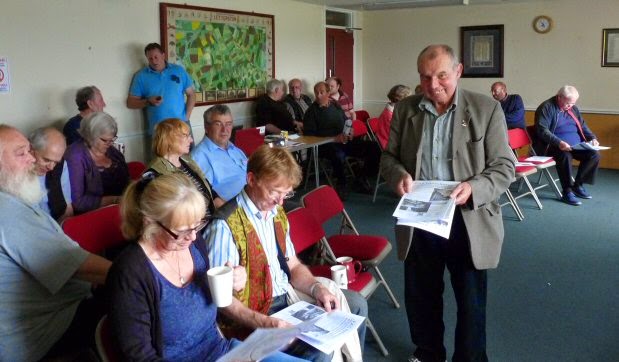