Just 25 of the faithful tonight - does the thought of quiz night frighten a few away?
Here is a view of Jim getting ready for the regular "What's Up in the Sky" feature. 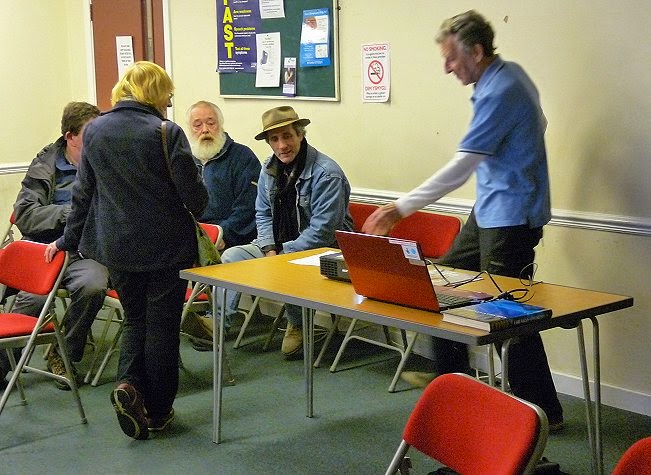 Of course - like the proverbial "changing of  the light bulb" jokes - it takes 1 to do it and 4 to supervise!!

The laptop was in update mode again which caused some confusion/merriment during the evening.

Jim enlightened us as to the current planet/moon situation and gave an insight into some forthcoming comets that may well be a treat in January.

Before that of course we have the regular Geminid meteor shower - sadly this year our viewing will be hampered by the full moon.

The Geminids are an exception to the "normal" showers which result from the Earth passing through cometary debris. The Geminids result from the asteroid Phaethon which was only discovered in 1983. It's most remarkable distinction is that it approaches the Sun closer than any other asteroid. At perihelion it is only 13 million miles from the Sun - less than half on Mercury's perihelion distance - which means temperatures rise to > 1000 degrees F.

Following tea and the proverbial mince pies we moved into "the quiz". 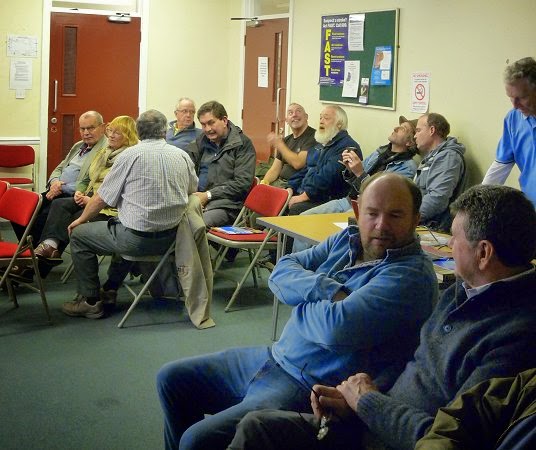 We had 25 multi-choice questions this year so that, instead of a team effort we covered this individually.

Some questions were strictly astronomical - dealing with Copernicus and Kepler's Laws - so required some knowledge or a good memory from earlier lectures!

Others were the "read the question carefully" type.
"How many stars are there in the Solar System?"
"Did the Sun exist 5000 light years ago?"
"What constellation is the closest of all to Earth?"

Surprisingly - it appears that no-one fell into the trap though ripples of laughter were heard when the questions were read. 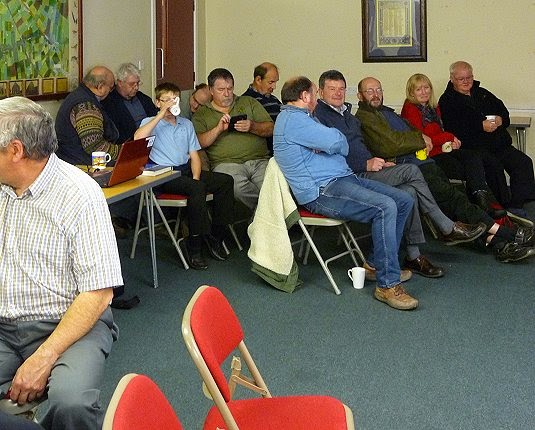 Rob, our resident physicist, achieved a score of 24 and a few others reached the 20's so perhaps it was not as straightforward as I originally thought.

Still it was meant as a "bit of fun" and was received as such.

This month we had a visit from Mark Griffiths, a free-lance journalist, who once worked for the Pembrokeshire Herald.

Mark has been "threatening" to visit us for photographs for some weeks and this meeting he finally made it.
He has been commissioned to do a piece on South Wales life and has visited a number of local groups in his research. 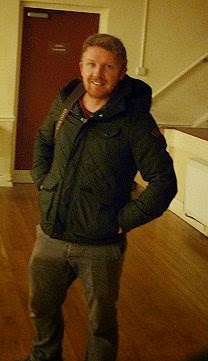 This is the man - he took many pictures of us so I couldn't resist capturing him before we left.
Looks as if he had no objection to that.

We tried for a little viewing through the cloud cover.
In fact while the meeting was going on Mark was photographing Rob in the car park.

Rob had brought one of his  big 'scopes along for the photo-shoot and Mark did say that he would send us some of his pictures so we hope to show some of them at a later date.

A good meeting to finish the year - it was good to read expressions of appreciation on the forum also.

In 2015 we hope to have some of our "regulars" back - Gladys and friends, Brian and Liz etc.

The January theme is "Astrophotography, mainly without a Telescope" - to be covered by Dave Lewis.
We look forward to that.
Posted by mike at 06:17 No comments: