The astronomy night arranged with Pembrokeshire National Park coincided with the peak of the Lyrid meteor shower on 22nd April - the event was timed (officially) for 9.00 pm - 11.00 p.m. 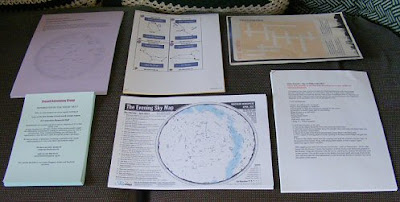 Preparation was the key and we printed off a number of freebies - information sheets, star charts and the like to make the evening more meaningful.
I did ask the question - fully booked meant 31 people made an advance booking - several more arrived hoping that there was enough space. 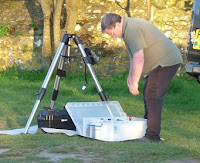 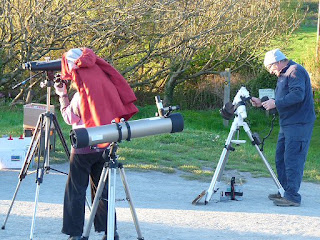 We had around 10 from the local astronomy group and this is a selection of the "early birds" that arrived to set up the equipment while it was still light. 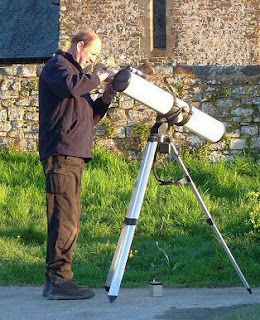 Richard, here, was one of the first. Here seen setting up his Newtonian. He also brought along the group's 6" Dobsonian which we "borrowed" later as we were having problems with the group's Tasco.


The 1st object on view was the planet Jupiter which wowed a number of the early attendees.
The four Galilean moons were easily seen in binoculars and by moving from 'scope to 'scope many also saw the equatorial belts and later the Great Red Spot was visible.

The site lived up to expectations and soon it was very dark and some serious skywatching could begin.

Our visitors delighted to see stars, constellations, double stars, galaxies and nebulae that were new to many of them and we were kept busy showing off these these marvels to an enthusiastic audience. 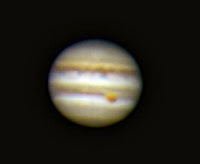 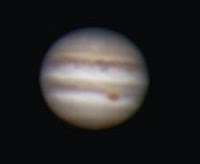 Here we have a couple of images of Jupiter - taken by Rob on the night. The Great Red Spot is clearly visible on these pictures. The GRS is allegedly a weather feature that has been visible on the planet possibly for 350 years. 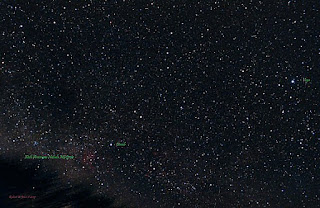 It is extremely difficult to see naked eye but the camera reveals much more.

It is an aptly named emission nebula - we can identify features that seem to resemble those on the North American continent. 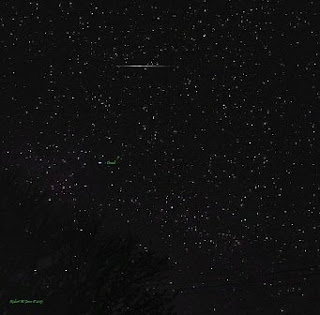 A number of people saw Lyrids and Rob was very pleased with himself because he captured an image for the first time - we see it here in the middle, about a third of the way down.

Many Lyrids are as bright as the main stars of Ursa Major (the Plough) and often give rise to a persistent train as seen here.

The set finishing time was 11.00 pm but many of us stayed much longer. The Moon being out of the way was an added bonus for this night.

The cry "when are we doing it again?" was made and I'm confident that later in the year we will.

The Pembrokeshire Coast National Park Ranger (Dan) who organised the event was pleased with the turn out - as were we all. A clear night for astronomy is unusual enough but one free from rain and wind made it an extra special occasion.