The July meeting was on our usual 1st Tuesday on the month - 7th July at 7.00pm at Letterston Memorial Hall. 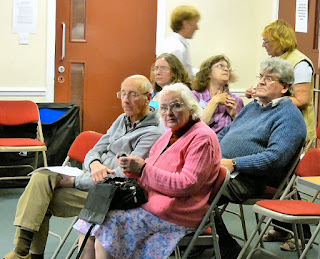 We had 30 attending including at least 1 newcomer - Jasmine from Whitland.
She has attended Swansea meetings but this time came straight to us from work - there's dedication for you!!

Here we have some of the early arrivers

Gladys is at the front along with her husband/taxi driver! - (that's what he calls himself). 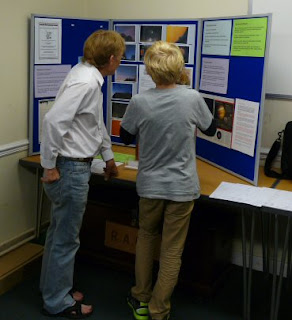 We really should take it to all meetings as it always has something of interest on it.

Now that we have a container (see forum) on site that should be more of a possibility!!

Jim, fresh from his holiday in Oz, commenced with the "What's Up" in July.

With little dark sky at this time of year actual astronomy is limited but for those that want to stay up late (or get up early) there are a few things visible.
One event Jim hilighted was the "New Horizons" probe to Pluto. When it left in 1996 Pluto was a fully fledged planet but then it was demoted and is now classified as a dwarf planet along with Ceres and a few others..
As I write this New Horizons is at its closest point (well, Tuesday actually)  to Pluto, taking pictures of the dwarf planet and its 5 moons, which will surely delight us in the months to come. 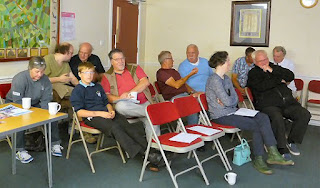 It is worth keeping an eye on our "Twitter" page as snippets get put on there also. Here's the link:

Kim followed this with the main item on "Women in Astronomy"
I'll arrange to have this put on the forum so that we can all benefit from it once more.

Some of the women Kim mentioned are the "unsung heroes of astronomy".
In the era of Caroline Herschel, for example, the woman could do little practical work but was allowed to document the work of her brother William.
She did, however, discover several comets and received a gold medal from the R.A.S. and another on her 96th birthday from the King of Prussia.
The account of Jocelyn Bell Burnell and the discovery of pulsars was another episode that showed that astronomy was very much a man's world until fairly recent times.

Strictly speaking this was true in many fields. If you have the opportunity find and read the books by PBM Allan on Moths. A really humorous chapter is the one which outlines just what the entomologists wife is permitted to do. I like to think it is somewhat tongue in cheek but it gives an  another insight into that bygone era.