A good turnout for the October  meeting with 28 present including a couple from Australia, visiting locally just for a few days before going on to London prior to returning home.
They came  with Gladys arguably our oldest regular member.

I believe that's Gladys with her back to the camera - cameras do that to people I've discovered.

Richard did the sterling job of preparing refreshments for us all both  before and during the meeting.
Thanks for that Richard. :<)
After setting up the projector it was time to make a start with the item - "What's Up in October".

Jim began by referring to the Summer Triangle - still a prominent feature for several weeks and followed up with mention of clusters that are now beginning to appear in the night sky - M13, Pleiades and the Double Cluster in Perseus.
Not much in the planet line is visible this month - Venus is available early evening though fairly low so a good vantage point is needed..
Jupiter is the "star" in the planetary line-up this month, being a bright object in Taurus rising around midnight and followed some 2 hours later by the much dimmer planet - Mars.
Jim also made mention of some of the October meteor showers - the  Taurids were of particular interest being associated with Comet Encke which is also showing this month.

Our thanks to Jim for drawing these features to our attention.

Following refreshments we moved into the main lecture on comets delivered by "yours truly". 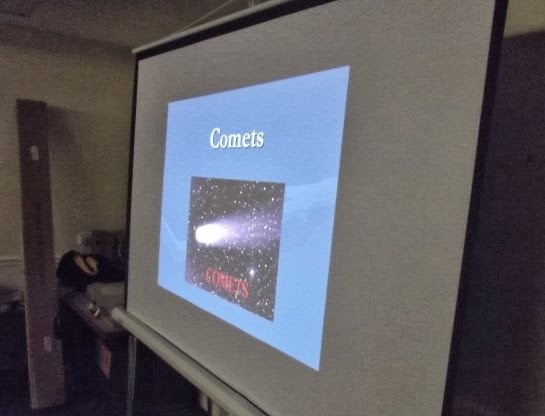 Many comets including Hyakutake  on this opening image have the sobriquet "Great" as a result of their brightness/public awareness.

Mike took us through Comets in the past - on the Bayeux Tapestry for example we have a representation of what we now know to be Halley's comet!
Our present day understanding is that the short-period comets (< 200 years orbital period) emanate from the Kuiper belt beyond Neptune whereas long-period comets come from even further afield - a region called the Oort cloud.
Comets, which by the N.A.S.A definition must contain 85% ice often achieve huge tails - they can extend a distance equal to that of the Sun to the Earth - and we hope that Comet ISON, soon to grace our skies, will be equally impressive.
One little nugget that Mike shared with us was that Halley's Comet has been sighted back to 240 B.C.E.
The 1985 sighting, seen by a number in attendance, was the 30th of an unbroken series of sightings every 75-78 years for over two milleniums.

Before and after there was plenty of time to chat and browse the items on display.
For this meeting Mark brought along a number of his older/duplicate astronomy books for sale - that looks like Roy and Peter perusing them in the lower picture. 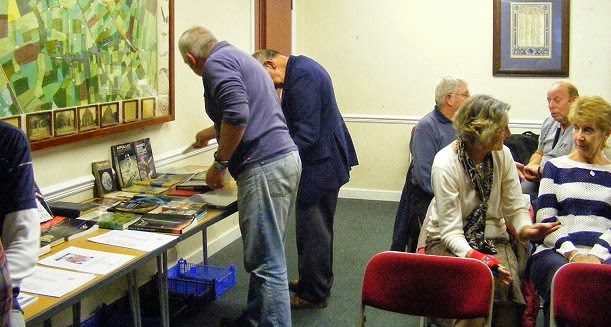 I'm beginning to find that there are a number of faces I cannot put a name to so if you are fairly new-ish help me out - at the next meeting come and say hello.

No viewing of the night sky was possible at this meeting due to the cloud cover - perhaps in November!!

As a  reminder - the 5th November meeting main lecture is on the subject:

Stellar Evolution and the HR diagram - Part 2 and will be covered by my old friend Kim Gowney.
(Note: this covers low mass stars only)