We arrived 30 minutes early (as is our custom) to set up the projector, telescope and tea room.

Already Chairman Jim along with Andrew S., Edward and Jonathan  were in residence setting up a brilliant display on advertising boards..

(What time did they arrive I wonder!)


Plenty of enlightening information this time - don't forget to look at these at the next meeting. We often get sidetracked with other things but they contain plenty of ancillary material.

This was a quieter moment in the kitchen - Brian, Liz and Andrew S. getting refuelled.
Sue is doing the honours here though over time a number get involved in the tea and biscuit duties.
Volunteers are always needed to share the load so don't hold back - this is the job where you meet everyone ( and also, if you are like me, forget their names very quickly!!)

Here we have Gladys and Peter enjoying a cup of nectar before proceedings start.
Gladys is arguably our oldest member and came to the meeting equipped with a diagram showing the path of Comet C/2011 L4 Pannstarrs and a number of questions.

The meeting started, as is our custom, with a review of "What's Up" in the March night sky.
Jim, our Chairman, drew attention to a number of constellations that are prominent at this time of year but naturally special mention was made of the first comet of the year which should be in evidence in our skies very soon.
Here is a pointer:
“After sunset, scan the horizon roughly in the western direction. On the 12 and 13 March, there is a nice association with the thin crescent Moon. You can use the Moon as a guide, and search just down or to the left of the Moon. Through binoculars you should be able to see the head of the comet and certainly the .... tail."

Following further refreshments Mike provided the main lecture on - "Characters in The History of Astronomy - Tycho, Kepler and Galileo."
Characters was the right word. Tycho was the man with no nose (the result of losing a duel) who kept a dwarf named Jepp whom he believed had second sight and also a "tame" elk that had a fancy for strong beer. The list goes on.
Kepler was another "character" who calculated his mothers pregnancy to have lasted 224 days, 9 hours and 53 minutes. An indication of just how seriously he took astrology!
He also provided frank (and humorous) descriptions on how he viewed his grandmother, father and mother.
Also his selection of a wife gave insight into his unusual temperament.

Galileo the third "character" fell foul of the Catholic Church big time.
His findings agreed with Copernicus that the Earth was not the centre of the universe and he made it his mission to try to convince the hierarchy of the day the error of their way.
Putting his daughters in a convent for their protection gives an indication of the feeling he was battling and eventually he was made to recant though legend has it that on getting up from his knees he struck the earth and mumbled, “Eppur si muove! [And yet it does move!]”

We counted an attendance of 30 with a number attending for the first time - a regular feature of our meetings. Sadly a number of our "regulars" couldn't make it and we hope to see them in April. 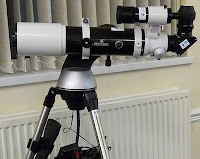 Yet again cloud cover prevented our having an observing session - but keep watch on the forum as the thought was mooted that if the skies looked to be clear we would visit Newgale in the hopes of seeing the comet!
And - wouldn't it be grand if one of us could get a picture of it!!

The PAG Skywatcher ED80 refractor, on the right, will be a useful tool one of these nights.

Just a reminder for the April meeting - Rob, our secretary, will be covering "Space Telecopes" - I'm sure he'll have some good pictures to show.

Talking pictures - mine seem to be getting worse on this blog so if anyone would like to be official photographer please give me a nudge!
Posted by mike at 09:01 No comments: