May Meeting - with a difference 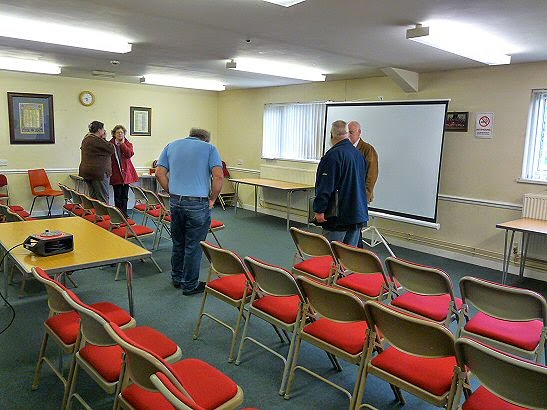 The scheduled talk for May was on  "Black Holes" and to be delivered by our secretary Rob Woodman.
Sadly, at short notice, Rob was called away to an examiners conference.
The joys of being Head of Physics at the local secondary school!
Hopefully Rob will be back with us in June as he is talking on "Dark Matter" on Tuesday the 3rd.

For May we adjusted the seating arrangement - the projector picture quality was much better this way round, more room was available for seating and the tables better situated for displays.

As it turned out we had just 22 turn up with several away as a result of the bank holiday no doubt.
We missed Kim, Jenny, Yoroy, Philt, Peter and of course Rob. (Both our tea makers being absent was a real problem!!)
Several other faces that I struggle to put a name too were also sadly missed. 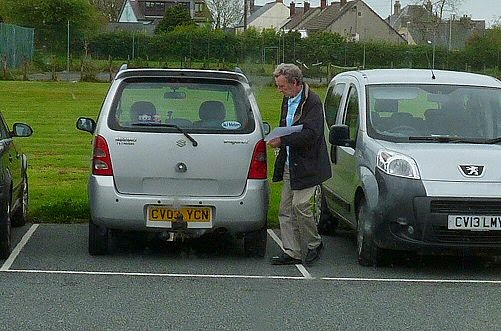 Around 7.10 we were beginning to get concerned as chairman Jim had the laptop, projector etc.

Anyway - here he is, cool as the proverbial cucumber, arriving and pictured from the kitchen.

We hurriedly set up the equipment and after a few minor hiccups were ready to go with the "What's Up in May"
item.

This was to be handled by Jim - another reason we were anxious for his arrival. 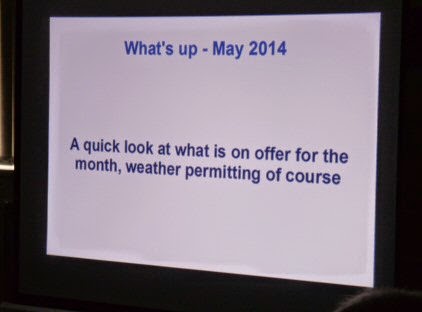 Meteor Showers were 1st on the agenda.
Around the 24th May the NEW 209P Linear shower is the one to watch. Predictions for peak rates have been made of several hundred meteors per hour! It could be somewhat of a damp squib as the peak is expected around 08.00- 09.00 BST on the 24th when the Sun will be well above the UK horizon. Also the time period is narrow - a few hours or possibly just a few minutes.
Meteors are reliably unpredictable so anything could happen.

Mercury was mentioned as the planet to look out for at the end of the month - it fades as the month progresses but even so some good views should be possible. There is not much to see (aside from phases) but it's nice to tick the box to say it was seen.

A number of interesting clusters are on view later in the evening including everyone's favourite the  M13 Hercules globular.


To follow we showed a dvd (with sound - another innovation for us) with the theme of the Moon one object that we can see all year round.
How the Full Moon affects people was an interesting observation - if in doubt ask a policeman as it would appear that the police forces around the world have much more on their plate around this time of the month.
The reasons behind the Moon pulling away from the Earth was also enlightening though not to worry as the final break is 50 million years away.

It was soon time to pack all the equipment together and to re-arrange the room to the condition it was in when we arrived.
Many members helped and it was done quickly - our thanks to all.

There was still time for some "astro chat" and we managed, for once, to vacate the building when we should. 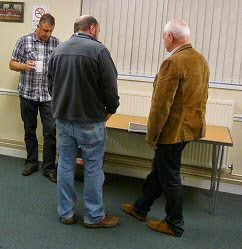 In another part of the room Andrew had some of his pictures on display - they always attract attention and many questions are answered.

The group now has a solid nucleus of those who are proficient at astro-imaging - a bonus for any astronomy society.

Just a question to conclude - I'm considering abandoning this blog and perhaps producing a newsletter to be e-mailed to members instead.
Those without e-mail/internet (and we have one or two) could have hard copy instead.

So any thoughts - good or bad?

If you have something to share that could be put in the newsletter also. Put any observations on the forum and I'll look out for them.
Hope to see you all in June and meantime keep a look out for Mercury and those new meteors - I know  I will.
Posted by mike at 03:54 No comments: