Newgale is a stunning place as the following pictures show: 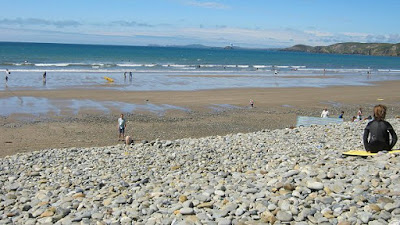 Saturday August 6th was the nominated day for this year's solar event and we were pleased that the forecast was good and on the day itself there was clear skies for the late morning and early afternoon at least.

The car park was pretty full and many holidaymakers were enjoying the day - this was promising! 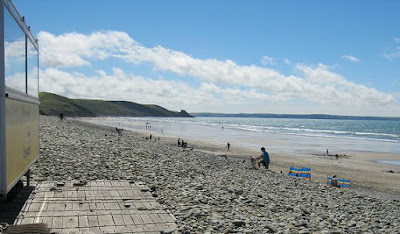 The life saving club premises at the far end of the car park was where we set out our stall.
Aside from 2 Coronado Solarmax solar telescopes and Roy's PST we had a number of other 'scopes with Mylar filters available for viewing.

The Power Tank proved useful as it powered the drive of both solar telescopes.

Plenty of literature was on hand to promote the PAG in other ways. 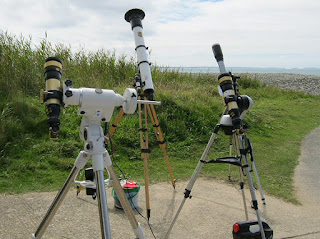 Here we have some of the equipment on hand and also a glimpse of the mottley crew.

Roy looks as if he's posing and possibly was.


We met people from Monmouth who said that they wanted to visit the Dark Sky Site at the Brecon Beacons (I like to think we inspired this family!). 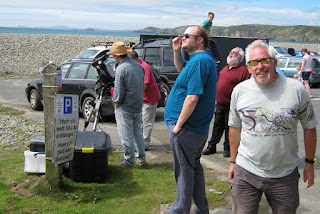 Others we spoke with were from  Cheltenham and yet more were from a Nottingham Astronomy Group.
It seems that their home group were having a barbeque that day that they were missing. (A thought that appealed greatly to Roy - so look out)

We had a number of family groups that looked through all of our equipment in turn and were greatly impressed with what could be seen.


The cloud was a bit of a problem and eventually it took over so that by 3 p.m. with wall to wall cloud and a brisk wind we had to pack up and go home. 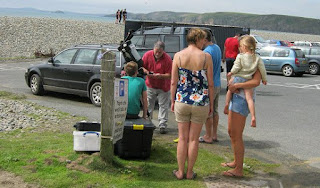 Rob and Nathan arrived just a little later than the rest of us and so Rob was convenient to blame for the change in the weather - though he did have a number looking through his jumbo telescope before the end.

Before we finally packed up one lady holidaymaker who was staying at Porthgain asked for our recommendations for future astronomy viewing.


We were pleased to tell her about the Perseid meteor shower that peaks on 12th/13th of August. When we suggested using the sun lounger and just naked eye viewing she was greatly impressed. Where do I look? she asked and we were pleased to give suggestions.

A good opportunity for us all, this one - share your sightings on the forum and should you be fortunate enough to get a picture do share that too.

I left my camera behind so these pictures are from Sue and when I get more from Jim I'll put them here also.
Posted by mike at 06:34 No comments: