Our event this year was held on Friday 10th January – a deliberate attempt to avoid overlapping with the BBC television "Stargazing Live" nights of 7th - 9th.

There was a little confusion as to the actual timing – some of the earlier printed posters advertised a 7.30 p.m. start though most of us were there for 7.00 p.m. 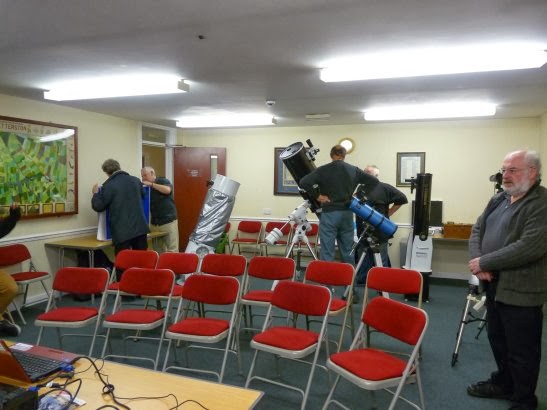 This was taken early - many 'scopes are being assembled in the background.

Note Brian on the right of this picture - that's what I call a "vicar" pose.

I counted 47 in attendance though another count was higher – with the room and corridors around comfortably filled and people coming and going a positive count was tricky.
Add to that at least 4 that “almost” made it and we had well over 50 there in spirit. 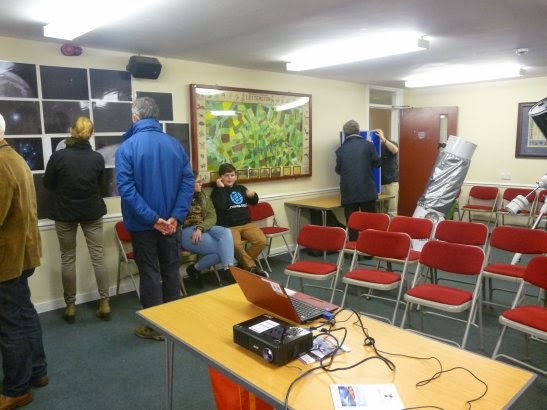 A good display of images on the wall and more "building" work at the rear.

From the few photographs I managed to take at least one deduction can be made - for now you can think about it, later I will reveal all.

Even the tea-room was quiet early on - I can make out Phil in this picture and Peter on the left. Who are the other two?

The original plan was to cover the “What’s up in January” feature then get out for some observing.
As it turned out the rain and overcast sky made viewing impossible so Plan B came into force yet again.

Following the “What’s Up” the inside display of a variety of ‘scopes was to become the main feature along with many excellent astronomical pictures etc.

BBC Stargazing Live also supplied us with some freebies which included 150 calendars. Several members had downloaded this from the website but declined to print it for economical reasons – moi aussi – hence they were gratefully received. 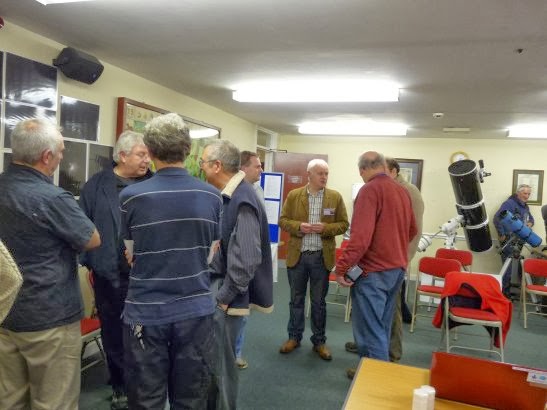 Kim handled the “What’s Up” feature via a PowerPoint presentation.
He mentioned the current planetary situation with the highlight being Jupiter followed by Mars though later in January the elusive planet Mercury is the one to look for in the evening sky.
A nice handout detailed winter constellations to  look out for and Kim mentioned that these also provide a signpost to other night sky features - so they are well worth learning to identify. 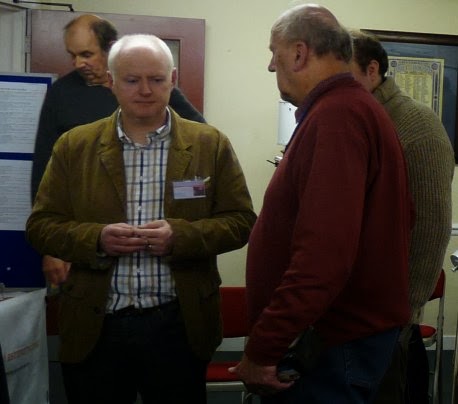 Answer – they were taken early and then later in the evening. None were taken at peak time.

I suppose that is a good sign really – even I was busy talking to visitors so had little time to take your pictures let alone admire the displays and whatever it was on Andrew’s laptop!!

In February we are back to our 1st Tuesday slot – let’s hope for some clear skies and then we can do what we all hope for on such occasions – some decent observing.
March 1st – 8th is National Astronomy Week and one of the events on our program includes a star count in the constellation of Orion – look out for that one!!