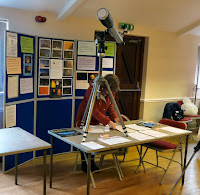 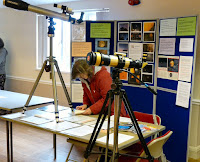 The Letterston Hall Committee politely requested our presence at the Carnival this year and Saturday the 13th June was the day.


The weather was forecast as rainy with 100% cloud so we opted for the indoor display.


I collected the display boards from Jim's place on the way and Sue and I arrived around 1.00 to find Phil already there.

The Coronado caught the eye of many and along with Phil's 70mm refractor, complete with solar  filter, we had plenty to talk about.

Likely we spoke to more people inside than we would have done outside and advanced our cause by the distribution of plenty of literature on the sky and the P.A.G.. The sheet at the bottom left of the table was the biggest mover (I know you can't see it!!) - it gave details of the group and the meeting place/time. (particularly handy for this venue.). 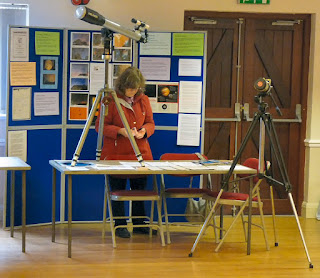 One of the outside attractions that attracted Phil was the steam engine below.

Being a "nuts and bolts" man this was right up his street and he went back many times.

Several we spoke with were seriously considering coming to meetings.

One man I spoke with had recently attended a lecture, in Welsh, given by Rhodri Evans.

Being from London and recently moved to Brimaston he didn't understand too much but he sounded keen to meet up with us. (Rob - I told you it began with a C - and I still don't know where it is!!). 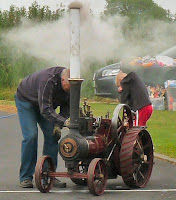 Things started getting noisy what with dancing and drums so by 4.30 we were ready to pack up - and it was still raining.

I counted just 25 of us that met on our usual 1st Tuesday of the month.
Several "regulars" were not with us - Chairman Jim was visiting family in Australia, Rob & Nathan apologized for their absence, Goodwick Mike and Kim & Jenny were unusually not with us but hopefully will be back in July. 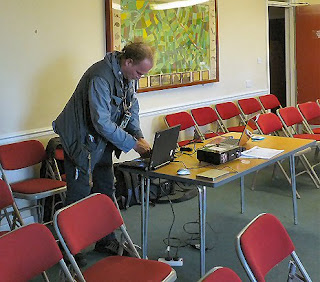 Always good to have new faces and this time it was Keith who has recently moved into Letterston so managed to find us quite easily.

He has a Skywatcher 127 that he brought along seeking some advice. After the meeting several of us made some (hopefully) encouraging observations.

Here we have Andrew Sprott from Swansea - the first man to arrive. He gave the warmly received talk on the "History of Telescopes" - material that his old friend Fred Whittle (now sadly deceased) had compiled with him some years ago. 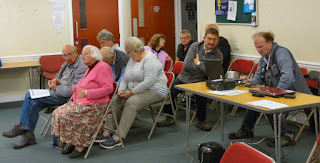 First we had our usual "What's Up" material for the month of June.
Though daylight hours are greatly reduced currently -  the good news is that we are downhill to winter after 21st June, the date for the Summer Solstice in 2015.
The material has been placed on "dropbox" for easy download - you don't need an account just click on "open" when prompted.
(It does work - my guinea pig has tested it!!) 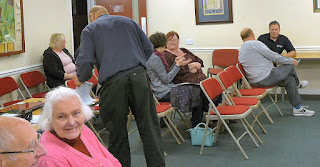 The lady beaming at the front is Gladys who came with her husband (or chauffeur as he called himself).
The two ladies that generally bring her were not free so Tony(?) stepped in.

Next month (July 7th) is our last meeting until September.
Jim will handle the "What's Up" and the main talk on "Women in Astronomy" is being covered by Kim Gowney.

Before that we have been invited to support the Letterston Carnival on Saturday June 13th.
Several of us will be there to view our closest star with dedicated Solar telescopes and others will be on hand with telescopes having  the requisite filters attached for safe viewing.
Join us if you can - weather permitting it is a good opportunity to share our hobby with those in the territory!
Check the forum for latest timing/news but I anticipate we will arrive around noon.
Posted by mike at 11:55 No comments: