Stellar Evolution and the H.R. Diagram

A good turn out for the “Stellar Evolution” meeting around 30 turned up (27 by another count but 30 sounds better!) including for the 1st time – Ian from Hazelbeach and from Tenby - Dawn and her husband (what was his name?) and Sean their son. Making their 2nd meeting we had Kathy and her husband John (at least I’ve nailed him this time!) It was good to see a few others we missed in January also. Sadly Phil our deputy chairman and Rob our secretary couldn’t join us this time due to illness/other commitments. 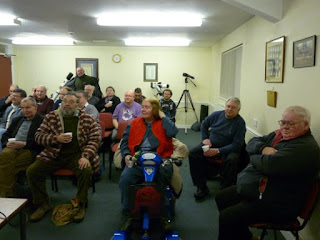 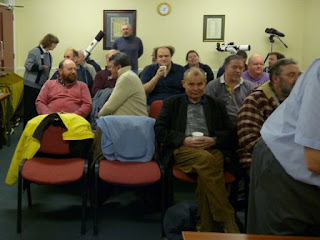 Here is some of our number patiently waiting for events to unfold.

Note: Mike from Goodwick at the front right – he is really just resting his eyes.

The picture below shows the other side of the hall with Kim in the foreground (blue shirt) getting things ready for the serious part of the meeeting.

The meeting commenced with a review of “What’s Up in February” a look at what we hope to see this month weather permitting.
Mike highlighted Mercury on the planetary front – February is the best month of the year to nail down this elusive planet that only 1 in 100 of the population has seen!
He also considered the Moon crater Petavius, doomday asteroids, the bright comets promised for March and November and the subject of Zodiacal light – interestingly the subject of Brian May’s (of rock group Queen fame) thesis for his PhD. 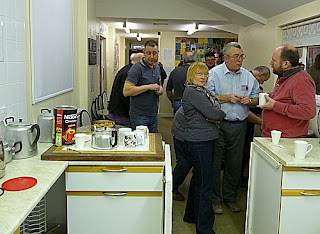 Tea -time - we generally have a few of these!!

Very soon it was time for the main lecture delivered by Kim – Part 1 of Stellar Evolution and the HR diagram. (Part 2 on the “Death of Stars” will be in November).
Kim was a little concerned that this might be somewhat cerebral (my words) but needn’t have worried.
I particularly enjoyed diagrams such as the HR diagram for the Pleiades cluster. The main sequence for the Pleiades cluster is very narrow, unlike the main sequence for the nearby stars.  This narrowness results from the fact that all the stars in the Pleiades cluster are the same age.  As they age, they move as a group to higher luminosities and redder colors, but they preserve their narrow distribution on the HR Diagram.
The comments I heard after the talk and particularly the questions posed by the audience proved it to be well received.

All too soon it was time to pack up and much as we have willing helpers to man the tea/coffee so we did in packing up.

Not many left – Graham, Peter Richard and Ian  and who is that admiring Jim’s Tal telescope? 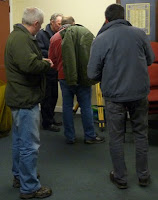 More interest in the Tal.


We did glimpse Orion and Taurus as we arrived but just briefly – the wind and cloud cover was once again not in our favour for viewing.
Thanks to all who attended and made it such a memorable occasion.


Next month the main lecture – in a somewhat lighter vein – will be “Characters in the History of Astronomy- Tycho, Kepler and Galileo”