Our meeting on 2nd April was a memorable occasion due, in part, to the clear skies enjoyed later in the evening.
As is our custom we commenced the official proceedings (unofficial was the tea and biscuits beforehand!!) with the "What's Up" feature - a look at what is on offer in the April night sky.
Mike made special mention of Comet PanSTARRS currently in Andromeda but rising, as the month progresses, to Casseiopia and fading as it does so.
Also on show during April is the Lyrid meteor shower, a partial eclipse of the moon (very partial) minor planets Vesta and Ceres and the planet of the month - Saturn at a very  favorable opposition on the 28th. 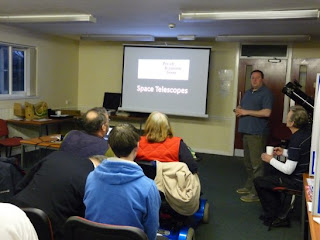 Following refreshments our secretary, Rob covered the main lecture dealing with "Space Telescopes."
The number and variety of Space telescopes was an eye-opener to us all and the understanding of the term "Lagrangian Point" was another highlight
Here we have a sample of the 27 present on the night - and note Jim, our Chairman, looking very learned on the right.. 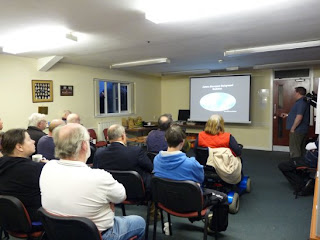 A number of our regulars couldn't make it on the night - Kim & Jenny with visitors and our Vice Chairman Phil with car  problems and several more but, on a positive note, we again had a number for the first time including Brian 007 from Pembroke Dock who brought his reflector along to have the collimation looked at - hopefully that was resolved as a number of knowledgeable eyes  looked over it.
Another newcomer was Simon - we hope to meet these again in May along with the many others that could not make it this month.

Following refreshments it was time to look at the sky - Jim described things  eloquently:

The big attraction of the night however was the comet PANSTARRS which many of us had yet to see including myself.
After the meeting there were a number of telescopes and big binoculars set up in the car park and despite the distraction from the hall lighting I think we all got to see the comet. I know I was suitably impressed by it.
Jupiter was also well placed for viewing with the Galilean moons on display as were its cloud bands.
All in all it was the clearest night I think since we started using the hall at Letterston.
Unfortunately Phil couldn't make it due to car problems so our 10" telescope wasn't available.
I got the feeling that we all left for home with a satisfied feeling that we had managed to see this comet.

If we add to that the views of the Hyades, Pleiades, M42 etc., - Kathy was in and out of her wheelchair like the proverbial jack in the box - it concluded the evening in a memorable fashion.

Next month the main lecture is to be on Archeo-Astronomy - and let's hope for a clear night again - though they are getting lighter!!