December already and the last meeting for this year - where the does time go? 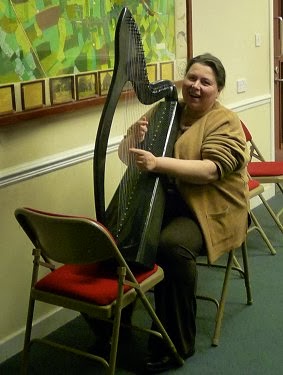 A meeting with an added dimension this time.

Brian hand-made this carbon fibre harp - even down to the moulding and here we have Liz, just before the meeting , giving an impromptu demonstration for us.

We had 24 in attendance, several back from fireworks duty last month but still a few of the (normally) faithful could not attend this time for various reasons.

Richard did his usual sterling job of manning the tearoom ably assisted by  Phil who arrived early and did pretty much a one-man job of sorting out the hall.

Both were a great help, particularly to me as I generally struggle to pull all things together before the meeting starts.
This time I was fairly relaxed. 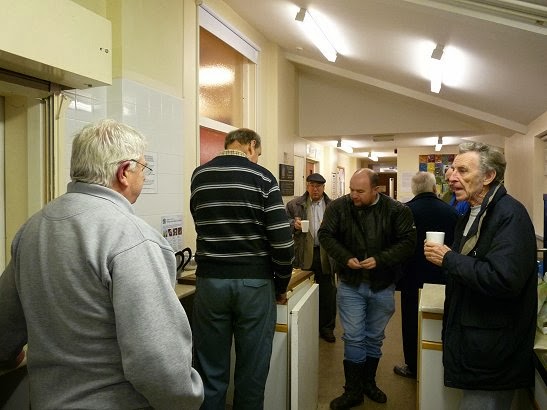 Here we have the tea room where there is always a good gathering.

Mince pies were the added attraction tonight though surprisingly few were eaten.
Last year, I recollect, was much the same - perhaps astronomers are not mince pie people.


Soon it was time for Jim to give his presentation of "What's Up in the December Sky."
The hi-light would have been Comet ISON but sadly it failed to survive perihelion at the end of November though as Jim reminded us we do still have a number of other comets currently on offer including Encke's and perhaps the brightest of the bunch comet Lovejoy. 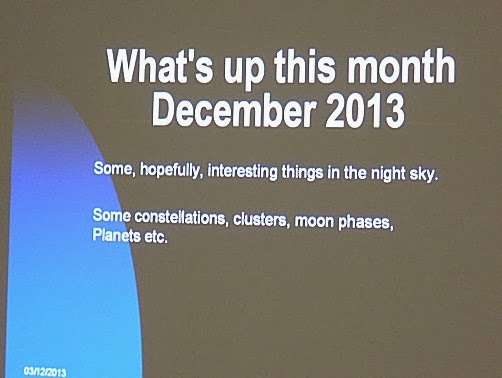 Jupiter is the dominant planet on show this month - and indeed for the next few months so we are hoping for some clear skies to spot the dominant features and moons.
Winter constellations are now reminding us of the cold and dark time of year.
Wrap up warm Jim advised - sensible advice.
Other features prominent in December include the Andromeda galaxy M31 and also M33 the Triangulum galaxy which Jim has actually seen naked eye in Freystrop
M33 is arguable the most distant object visible to the naked eye though viewing conditions need to be excellent to see this one at magnitude 5.

Hi-lights over, we were entertained a little more on the harp and enticed by more tea and biscuits.

Look carefully - can you spot someone in the picture on the right who has other things on her mind!!


The December quiz last year gave some real problems so this year I attempted to make it somewhat easier - 37 questions that were either multi-choice or that had 1 word answers. 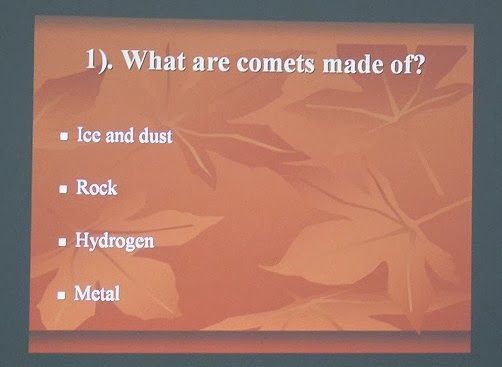 Here's the proof with question 1 - even 10 year old Nathan got this one right as well as many of the other questions.
Some questions or should I say answers proved contentious but then quizzes always do and as I stressed at the beginning - it is just a bit of fun.

Teams were made up of 4/5 members working together so no pressure there.

The best team scored 34 another 33 and yet another 32 so I think I got it about right this time.


Sadly the skies were cloudy with even some rain on our arrival though afterwards a few of us did glimpse Jupiter through the clouds. 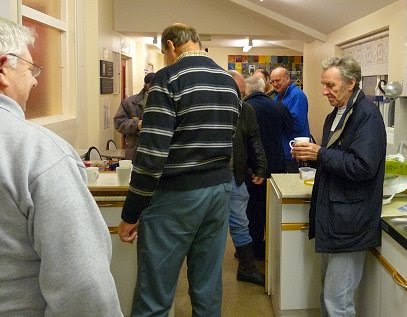 A final look at the tea room and yes the guy on the right is still there - well done Jim.

The BBC is doing "Stargazing Live" again in 2014 so we have moved our meeting day to Friday the 10th January, the same venue - Letterston Memorial Hall at 7.00p.m.
We will be covering the What's Up feature only at this meeting - hopefully allowing more time for viewing the night sky.

The poster below says it all - but note that it is 7.00 p.m. (the final print has been amended). We will be advertising this as a public event so let's hope for a good turn out and some good weather. 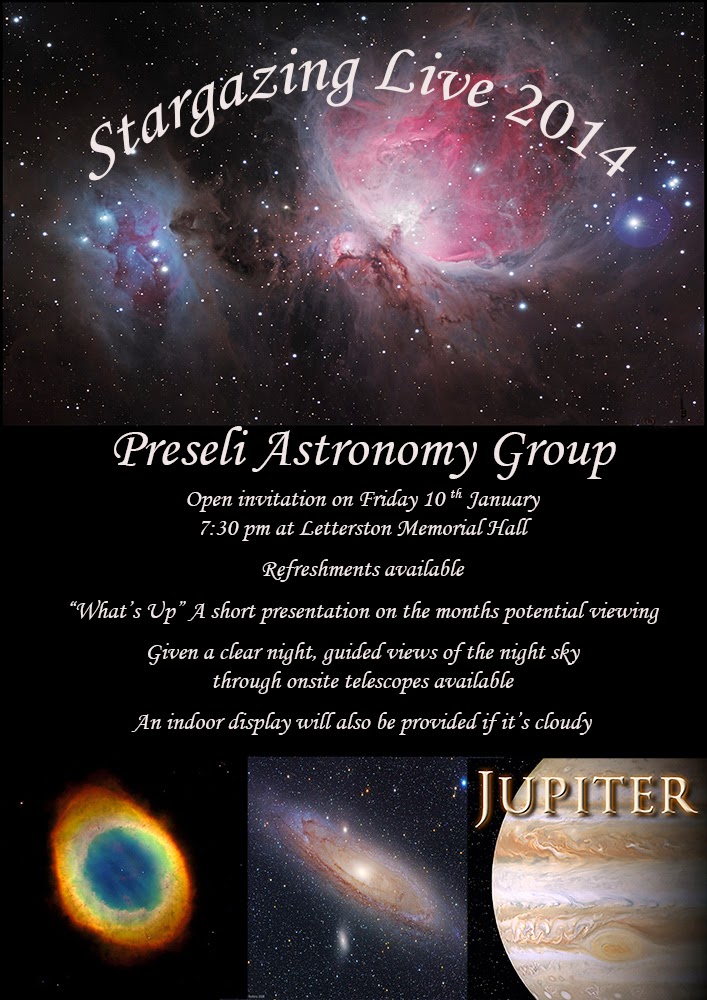