September - Something of a Bizarre Affair


This was one of the titles suggested for the September meeting.
Confusion reigned as to who was giving the main lecture – the answer was cast in stone months previously and placed on the forum but to quote Jim our Chairman:


“we muddled through and the evening could, of course, have been a disaster but we have a good bunch of understanding people.”

So the committee extends their thanks and apologies to that “good bunch” for bearing with us in difficult circumstances - including fetching the milk (Peter?) and biscuits (Mike?). (Something we should never be without!) 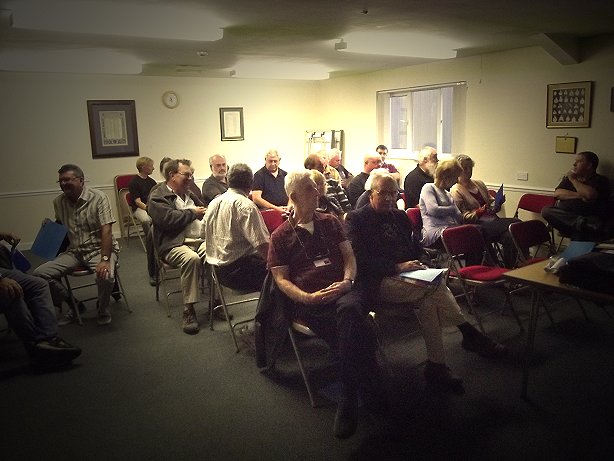 The one and only picture taken - I've tweaked it to improve the clarity but it's still no "Damien Peach."
(Why does Brian always look so photogenic?)

The figure I was given was c 25 attended with a couple for the 1st time and that “good bunch” were – after some wrestling with the laptop/projector – treated to Jim covering the material “What’s Up in September.”
One of the  highlights Jim drew upon was the recent discovery of the nova in the constellation Delphinus – this was a particularly bright nova (magnitude 4.5 was one estimate) and was visible naked eye from a suitably dark sky.
More here:
http://darkskydiary.wordpress.com/2013/08/15/a-bright-nova-appears-in-delphinus/

The good news for the evening was the clear skies and Jim supplied these observations:

“Outside the sky was absolutely clear and as neither Phil or I had brought any instruments other than my 10 x 50 bins but as it happened two members had brought their telescopes which they set up in the car park to give some views of Venus which was readily visible even naked eye from inside the kitchen.
As the light changed to dark the stars started popping into view and eventually we had probably the best viewing session since we started using the memorial hall.
A few of us had brought green laser pointers so we were able to point out many of the sights and constellations to the less experienced members.”

and Kim Gowney (one of the two) supplied this insight:

“After tea, myself, and Bob had scopes so we set up and those members and guests who remained long enough had views of Venus, Albireo, the Ring Nebula, M31, and M13 with a lot of chatter thrown in by motormouth - we stayed until just before 10.”

So it would appear that even without  Sue, Andrew & yours truly, the evening ended well.

Just one reminder that in the confusion was omitted – The FAS asked us to mention the council vacancies that are forthcoming – details are at:
http://fedastro.org.uk/fas/

If anyone would like to be considered for any of these vacancies let us know as soon as possible.