A late start due to calamities from many sides but 29 of us enjoyed our 1st meeting since July.

Here we have Jim looking extremely casual, almost nonchalant even though half an hour late.

He had the laptop so we couldn't start proceedings though by an amazing coincidence we had just collected a reserve laptop from our Secretary's home when Jim arrived.
Our membership secretary, Phil, was also late on this night - sadly missed as he is a great help in setting up the room early on. 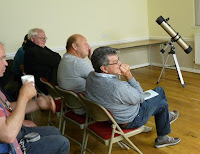 "What's Up" gave a helpful look at the current night sky. Not much in the planetary line though this is a good month for Neptune - the 15th is a particularly good date to remember as Neptune is occulted by the Moon on that day and around 9.00pm comes out from behind it.

Some good stuff around Cygnus and Lyra though they are a little too high for comfortable viewing. The Great Square of Pegasus was mentioned and it seems that 7 is the magic number.If that number of stars are visible in the square then the night is good for observing. Curiously a few days later around 4.00am Susan could make out 7/8 in the square - not often that happens!!

Kim then treated us to a demonstration of how to set up an equatorial telescope. 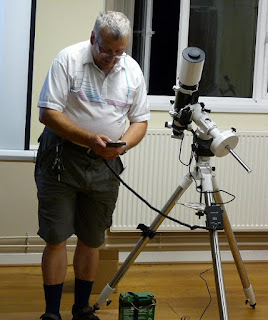 It was a warm night for gymnastics but Kim did a tidy job here.

What about those shorts!!
A "Beam me up Scottie" pose here.

It is the sort of demo that needs seeing many times but we got the idea.

The hire equipment was on display and 2 items were carried away by members - another member is on holiday later this month so opted for the October takeaway.

We have a 6" Dobsonian, 20x80 Celestron Binoculars  and a Tasco Reflector for hire at an extremely moderate rate so if you would like to hire one of these do make it known, 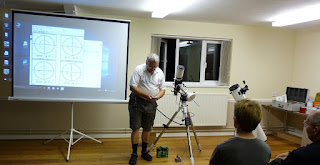 We also had a selection of FAS booklets which went better than anticipated - I should have brought more.

We also had a number of astrocalendars which were being sold off at just 50p each as they have limited content for the current year.

Next month the 2016/17 astrocalendars will be available at an excellent price!
Posted by mike at 10:52